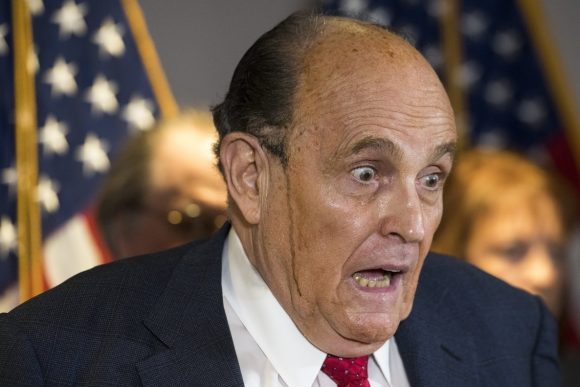 A drop of sweat mixed with hair dye falls on the face of an upset Giuliani, during Thursday’s press conference in Washington. Photo: Europa Press.

The legal team of the outgoing U.S. president yesterday brought his narrative of electoral fraud to a climax in the presidential elections at the beginning of the month. As unusual as it may seem to you, during a press conference, Trump’s lawyers claimed to have evidence of a “pattern” of voter fraud in several states.

Attorney Sidney Powell said they are aware of “the massive influence of communist money through Venezuela, Cuba, and probably China, in the U.S. elections and the interference of these countries that would have helped create a software application that altered the results. But things do not stop there, in this new chapter of the American electoral novel, they included the Venezuelan leader, Hugo Chavez, who according to them would be a relevant protagonist in the alleged operation, seven years after his death.

According to Sidney Powell, Chavez would have achieved the creation of a Rule voting system and a software application of Smartmatic technology to ensure that he would never lose an election; and this technology would have been used during the vote count in the last U.S. election

The undeniable proof of all this, they say, is a “solid witness,” and they conveniently did not produce, nor did they say his name. They noted that the “witness” as soon as he saw several states close the polls on election night, he knew that the same thing was happening as in Venezuela.

Rudy Giuliani sweated so hard to make this new fraud speech credible, he ended up dripping dye from his hair.

Giuliani said a Venezuelan voting machine was used to count the votes. He said, “If we allow this to happen, we will become Venezuela. This is nothing more than the same McCarthyist rhetoric that Trump employed during the campaign , calling Biden a socialist, when in reality he is not, not by a long shot.

I know that all this that I have told you right now you are interpreting it as an absurdity, because it is something very crude, and it would not be a bad joke, if it were not for the serious implications, because the interference of foreign countries in an election is a very delicate issue and justification for aggressions and unilateral measures and the strengthening of the blockade.

Jorge Arreaza, the Venezuelan foreign minister, said that there are three levels: the lies, the absurd and the ridiculous, and that blaming Commander Chávez for Trump’s defeat is extremely ridiculous. The Cuban foreign minister also denied Cuba’s alleged interference and called the accusations–without proof–“pure slander.

The company Smartmatic published a statement assuring that they have never been owned, financed or supported by any government. And with respect to Dominion’s voting system, it is actually two companies competing for the same market.

Trump’s attorneys are oblivious to the fact that Chavez did lose elections, such as the referendum

PS5 stock due today in the UK at Very and