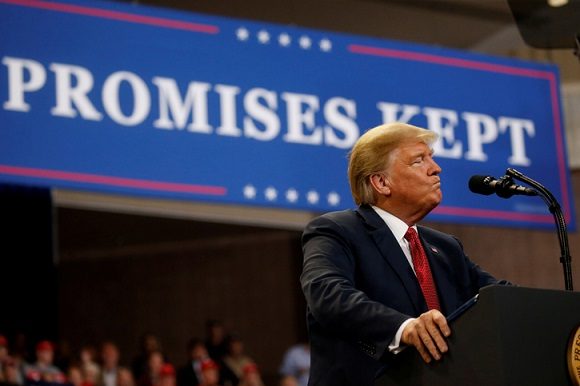 US President Donald Trump at a political event in Rochester, Minnesota. REUTERS/Leah Millis.

Back to “normal”. That’s it, Trump’s four hellish years are over, his outbursts, his growing authoritarianism, his exacerbated machismo, his xenophobia and racism, his attacks on the media, his intolerance, his arrogance, his support for white supremacism and its militias, his backing of the trigger-happy police against the African-American community, his systematic lies, his criminal management of the COVID-19 pandemic, his aggressive policy towards the environment, his break with important international treaties are all behind him.

Trump’s departure from the White House is a relief to everyone, no doubt, and the fact that there are more women in Biden’s Cabinet than ever before, reflecting also the great ethnic diversity of the US and even the diversity in sexual orientation, is, at least symbolically, an important positive change.

But what now, what can be expected from this new mandate, what will become of Trump and the ultra-right-wing movement he set in motion?

A speech full of vagueness and goodness

” Without unity there is no peace, only anger and bitterness.

“We can make the United States a force for good throughout the world,” a kind of royal phrase that is never missing from a presidential speech whether it be from a Republican or a Democrat, like the invocations to God and the call to pray all together.

There were practically no more messages. Common places, clichés, generalities, traditional discourse, without firm commitments, without a mobilizing message.

As opposed to “Let’s make America great again” and Trump’s “America First”, goodness at its best.

Consistent with the “moderate” candidate profile that Biden gave to his election campaign from the outset. A moderation and a passivity, a lack of reaction to the constant scandals and the delirious management of the pandemic by Trump that at many times exasperated the Democratic voters and made them doubt whether his party’s candidate really had an alternative program to offer.

Let’s compare the speeches. What did a real estate millionaire and reality show host like Donald Trump say on January 20, 2017 when he took over the presidency on the steps of the Capitol?

” Washington flourished, but the people did not share that wealth. Politicians prospered, but jobs were lost and businesses closed. The facility protected itself, but not the citizens of our country.”

And Donald Trump rocked the crowd, hundreds of thousands of people on the Capitol Mall when he promised:

Trump spoke of social inequalities, told them that “a nation ex

Hancock rejects calls to ease lockdown in areas with low